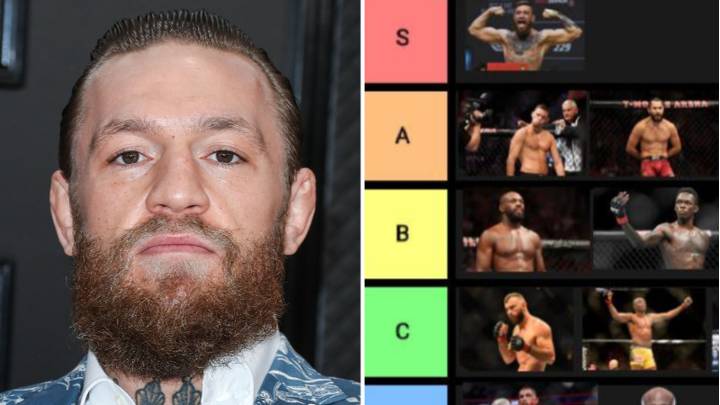 Ranking UFC stars on their actual ability is all well and good. SPORTbible’s own Adnan Riaz gave it a go, but what about the thing that really matters, their personality?

When it comes to the fight game, be it MMA or boxing, how well you can sell yourself, and the fight you’re in or want to be in, is almost as important as your ability.

Often if you can’t get yourself into a position where people want to see you hurt someone or get hurt then you won’t get the big pay days on pay-per-view. So who in UFC is the top and who is at the bottom for their personality?

One Reddit user gave it a go, and there’s no surprise to see Conor McGregor at the top of the pile:

Usually with these tiers the categories go from ‘G.O.A.T’ to ‘Trash’ or something like that. But unfortunately this time it’s just ranked S-F, no idea what the S is for.

The problem with ‘The Notorious’ being top of the list is that we’ve not been able to enjoy him in the octagon for some time and without a fight to sell, he’s not been as visible in the sport out of the cage either.

The Irishman did return to action on January 19th against Donald Cerrone, but he ‘retired’ from the fight game in June, although he is expected to come up against Dustin Poirier at some point next year.

Khabib Nurmagomedov, who also retired after his last bout against Justin Gaethje, is another fighter who features on the list, as rumours continue to swirl as to whether he will return.

UFC’s other top personalities include Jorge Masvidal and Nate Diaz, who met last year for the BMF title, with Masvidal coming out on top, and we’d happily see them face off again, especially if they let their personalities fly the way they did their strikes.

Who is the most entertaining fighter in UFC?

Let us know in the comments.

Serie A leaders Milan are one of Europe’s hottest soccer teams. Is their form sustainable?

Serie A leaders Milan are one of Europe’s hottest soccer teams....